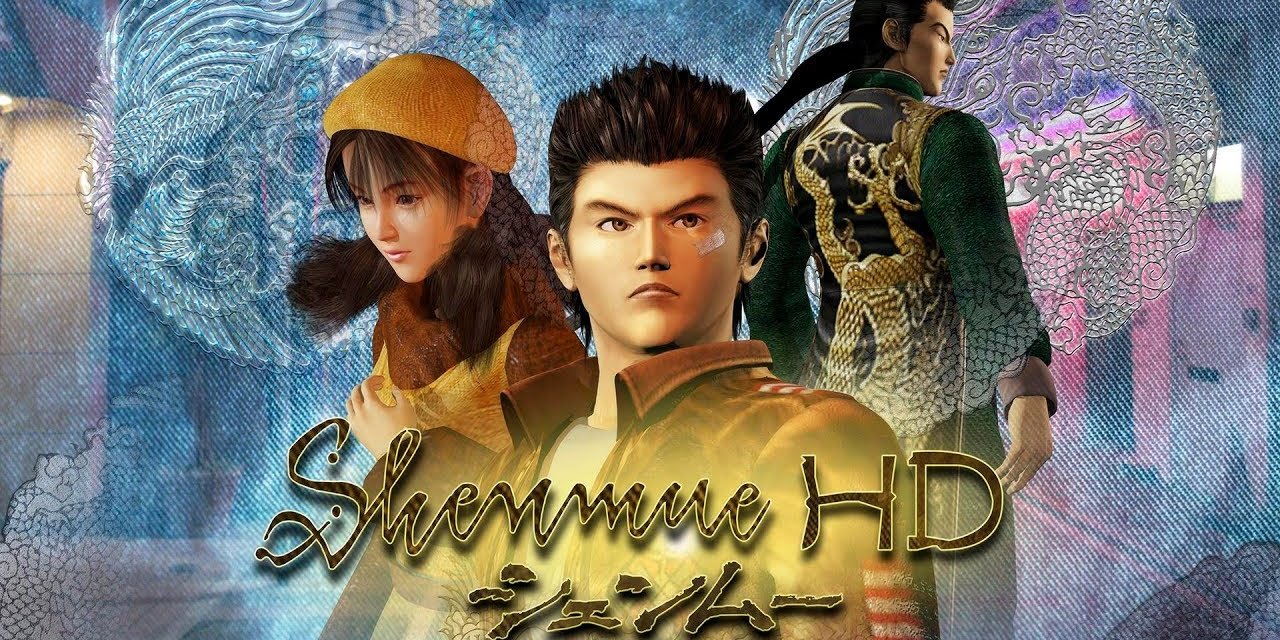 With the news that Shenmue III is little under a year away (August 2019) SEGA and d3t have jumped on the re-release bandwagon. Bringing out ports of the original niche hits. Not much in terms of enhancements have been made, but the games still more than hold their own by today’s standards. So read on if looking for sailors and men in black suits, is right up your street.

When I was merely 13years young and loving all the pokemon cards, playing marbles, football etc the usual balarva in that era. Also, I was an enthusiast of gaming, besides football, the epic adventure, storytelling games like the Final Fantasy series, Tomb Raider and Zelda being standout picks for me.

So when my uncle had purchased a Dreamcast and shown me some box art with 3 characters that hardly looked like super-heroes, with some weird patterns that I thought was related to a Chinese karate class I honestly did not think this game was for me.

How wrong I was!

I fell in love with Shenmue the moment Ryo left the Hazuki residence, exploring Dobuita and smashing through the original game all the way back some 17/18 years ago. It was a pioneer for a lot of games of today, and I’d urge any gamer on the fence with the series to give it a try at least once.

When I discovered Sega had at last given the 2 classics the green light for the HD treatment. I instantly went into fanboy mode and could not wait to get my mitts on the 2018 re-releases. Who’d of thought such a game with box art seemingly aimed at a more mature, sophisticated audience would fascinate such a youngun?

Shenmue tells the story of Ryo Hazuki, a young man desperate to understand the death of his father. Why did it happen? Just what are the Dragon & Phoenix mirrors? Who was that man (Lan-di) that stormed into the Dojo and caused Ryo and his family ever-lasting pain and anguish? (The opening scene where Ryo screams noooo, still sends shivers down my spine). It may sound fairly cliché but despite being near 2 decades old, the story is told beautifully. The game still remains a genuine revelation and one that intrigues me as much today as it did all those years ago.

In the original game, some annoyances gamers expressed were to do with clock watching whilst waiting for in-game events and a lack of area jumping. In the first part of the cult favorite, issues with pacing remain, standing around waiting for the watch to tick past certain times to trigger in-game events. (Just go play some Hang On or Space Harrier in the Arcade), or you could tend to the needs of a cat, buy some capsules, gamble all your yen in the slots. I appreciate it’s frustrating for some, I enjoyed the added sense of realism by having to find alternative things to do while waiting for the clock, it’s no different to real life. 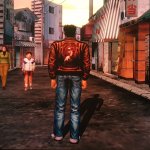 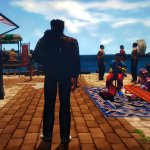 It’s pleasing to see that SEGA has catered to the more casual market by including the choice of area jumping. (For me I prefer to explore on foot, you never know what random in-game event you could miss).

Visually speaking, Shenmue has aged very well. The original games came out in 2000 & 2001, whilst you can clearly see environmental textures such as trees and some buildings are looking sub-par by today’s standards, the character animations, real-time weather system and graphics of the game still hold up impressively. Shenmue I & II remain two of the most innovating open world games on the market. (More so in Shenmue II) You can literally explore a large chunk of the shops, bars, cafes, restaurants, barbers and more, examining items, purchasing goods, it’s a delight to play.

The NPC’s go about their day to day lives in a realistic manner, leaving their front door one minute, to dining in a restaurant the next. It may not seem like much by today’s standards, but back in the old era of gaming the coding for many A.I was far more complicated and developers struggled to implement this to the same standard Yu Suzuki and his team did.

The exploration of Japan to Hong Kong, acquainting yourself with the many different characters along the way and seeing how Ryo matures as a man across his journey, remains some of the best gaming moments I’ve had. Few tales told in games of today have I felt so satisfied playing. Short of cash? Go work for a forklift company, gamble in a bar, earn a buck on the lucky hit stand, (could be mistaken for a new sims expansion). Many little aspects of the two games which broke new trends in its day are now so relevant to many games on the market.

The soundtrack is generally a soothing, enjoyable experience with moments of intense crescendos that add to the drama during fight scenes.

Speaking of fight scenes, how does an open world Virtua fighter sound? (great, maybe naff??) Sadly the fighting mechanics have not aged well, despite now being able to handle Ryo with the analog stick the movements and counters/blocks remain stiff and lacking. In some showdowns, the game throws up an invisible wall where it becomes nigh on impossible to dodge hits. Certain combo’s look impressive when button mashing and learning new moves, but generally speaking this is one area I hope is considerably different in how it feels when the third installment releases.

Loading times are greatly improved, but the image projection reverts to the Dreamcast setting of 4:3 during cutscenes. At least outside the cutscenes, the camera optimizes to 16:9 widescreen settings.

Also accessible is hi-res rendering and bloom settings that when turned off revert back to the original Dreamcast’s resolution output. This goes without saying that both games undeniably look crisper, sharper and of higher quality with both settings turned on. (Unless you’re a purist) 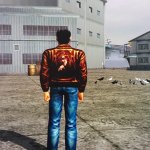 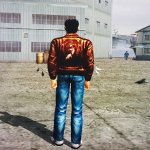 The voice acting remains laughable with it being more goofier and cheesy then what I remembered. If Ryo was paid 1 yen for every time he said “erm”, “sure” or “I See” he’d never need to work on the lucky hit stand again!

Yet, oddly for all the hilariously bad one-liners, It only adds to the appeal and charm of the game.

Despite the game’s flaws the pro’s outweigh them. The now dated/frowned upon QTE’s are actually pretty fun, exploring, partaking in mini-games, and immersing yourself in the world of Shenmue is a unique experience that I have felt in few games since. It’s like a coming together of many genres in one.

The Shenmue series has always divided opinion, with gamers generally speaking being either besotted with the game or loathing it for being the final straw that broke SEGA’s back. Yet, funnily enough, I wonder how many of these gamers forget that even their beloved gaming titles could of been heavily influenced by Yu Suzuki’s masterpieces?

I find myself in the first category and playing through these ports has only added to my excitement of the release of Shenmue III next year.

Shenmue HD is the best way of playing the classic titles, the HD release is not going to set pulses racing with any new features, it literally does what it says on the box. Shenmue HD is the most complete and accessible way of experiencing two iconic games of its time.

An All Time Classic 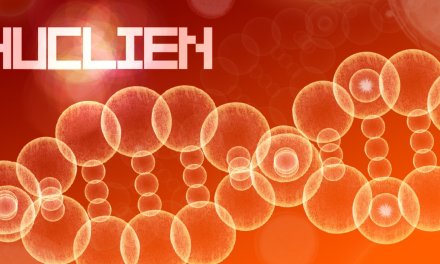 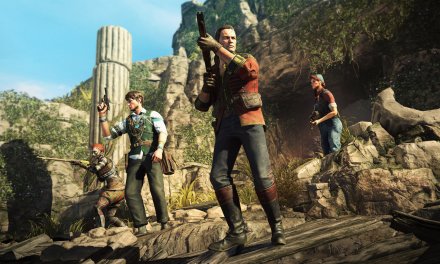 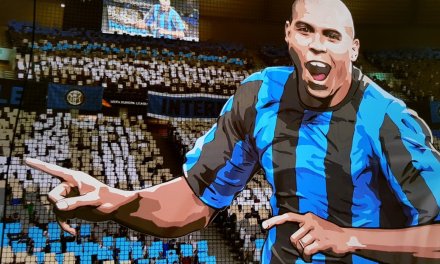 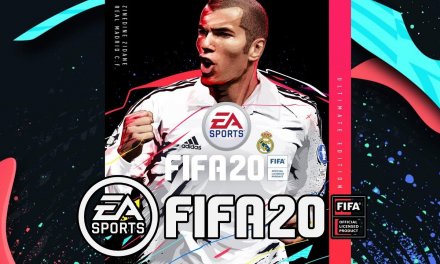